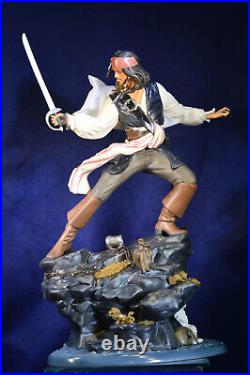 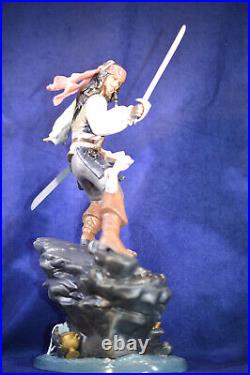 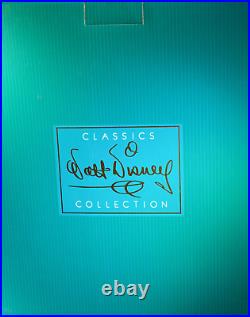 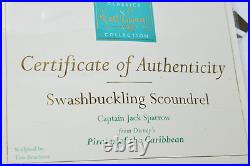 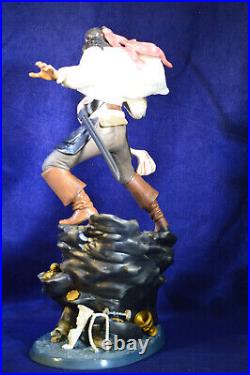 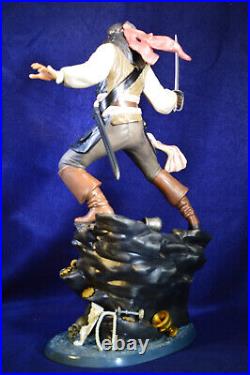 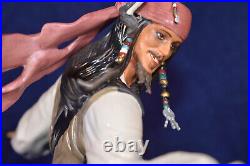 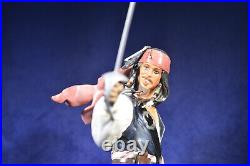 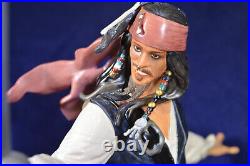 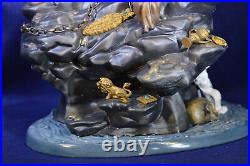 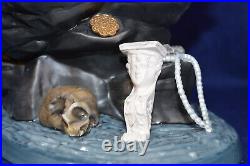 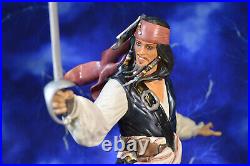 WDCC Pirates of the Caribbean. Like most pirates, Jack Sparrow wears four rings, while also wearing a shredded black wristband on his right wrist. Jack has two marks on his right forearm: the distinctive "P" brand marked on pirates by members of the East India Trading Company (this one in particular administered by Cutler Beckett) and a tattoo of a sparrow flying across the evening sunset. This is a well-known identifying mark, signifying that the bearer has sailed all of the Seven Seas.

Jack's back was also extensively tattooed with a 15th-century poem called the'Desiderata'. Perhaps the most fantastic object Jack carries among his "effects" is his Compass.

Obtained in barter from Tia Dalma, Jack's compass does not point north, but rather towards the thing that the person holding the compass wants most. Since "the thing you want most in this world" is a fairly loose definition, it has been demonstrated to mean people i. Elizabeth wanting Jack or Will, objects (such as the Black Pearl or the Dead Man's Chest), or a place (Isle de Muerta or Shipwreck Cove, for example). Jack's pistol remained with him for many years, after it was loaded with a single shot and carried with him to the desert island he was marooned on by Barbossa after being overthrown in a mutiny.

Jack escaped, and for the next ten years carried the pistol with him, intent on killing Barbossa with the single bullet he had been left. Thus, Jack could not bring himself to fire his pistol on anyone else; although he drew his pistol on Will Turner in order to end a duel between them, he did not use his shot and was thus ended up captured by the Royal Navy. Jack ultimately got his revenge on Barbossa, shooting him in the heart moments before Will reversed the curse that protected Barbossa. Jack was then free to load his pistol to capacity and continued to use it years after. Character: Jack Sparrow Title: Swashbuckling Scoundrel Size: 13-3/4 Item Number: 4007938 Sculptor: Tim Bruckner Plussing: Captain Jack Sparrow is richly plussed with 21 different bronze and pewter elements.

This figurine would make a wonderful addition to any Disney figurine collection! This sculpture was created through the collaborative efforts of the animators and other artists of The Walt Disney Studios, using the same principles applied to classic Disney animation.

In concept and execution, this is an authentic Disney three-dimensional representation of the original animated character and film scene, capturing the timeless spirit and beauty of Walt Disney's classic films in every detail. T his item is in new condition and includes the box as well as the Certificate of Authenticity. The items we sell come from a clean, smoke free environment. This item is in the category "Collectibles\Disneyana\Contemporary (1968-Now)\Figurines\WDCC".