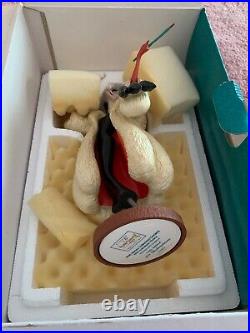 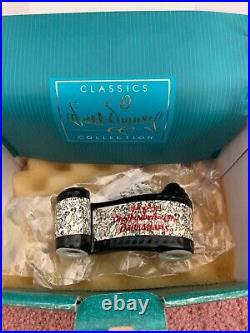 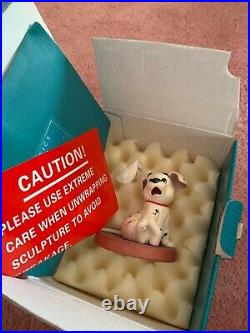 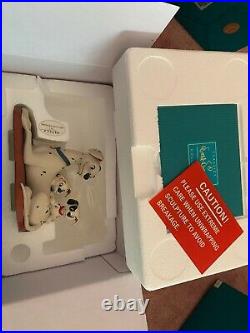 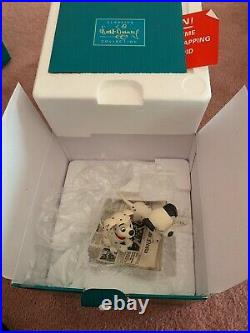 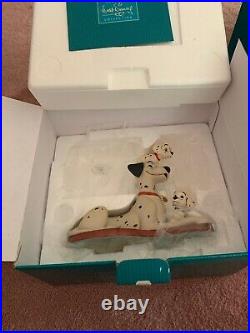 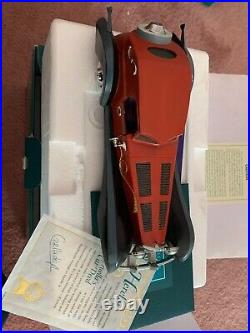 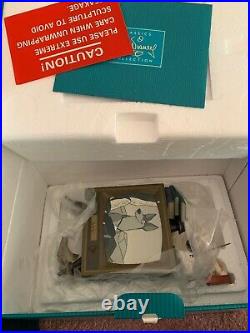 Lucky in front of TV. CRUELLA's CAR with the TITLE - sent away for the Title from WDCC (rare). Included original Disney box and Certificate of Authenticity (no certificate for Anita Darling). Walt Disney classics figurines- details on these figurines. The Classics Collection started in 1992 with three scenes, Bambi, Cinderella, and Fantasia's Sorcerer Apprentice.

Many other series have since been introduced. Some figurines are limited, and some have been retired.

Some of these figurines have risen high on the secondary market. The figurines are made of porcelain, and the process is similar to that use to make Hummel figurines.

Individual pieces are molded, put together, and fired in an oven. Then they are painted and fired again.

Choosing The Moment - Once the character and scene are selected, artists pour over original drawings, model sheets, background paintings and finished cels. By studying all the movement detail and subtle cues in line and form, artists can discover the specific film moment that defines the essence of the character, capturing the personality that reaches beyond the one particular scene. Working from hundreds of reference materials, artists sketch various angles of the character pose for sculpting.

Research and intuition tell them to bend an eyebrow to hint at the thoughts behind it, or stretch the line of a robe to indicate a turn. These drawings go through many critiques and revisions before the final concept is approved. The final drawing - and all the reference material - then go to the sculptor. Meticulously shaping the clay, the sculptor must ask What does this character look like from every angle - including many that were never drawn before? Disney animators help find the answer, and like the concept sketch, the clay sculpture is revised again and again before the final form is approved.

The final clay sculpt is cut into pieces and a plaster mold of each piece is made. The more complex and delicate the sculpture, the more pieces are needed (some Classics Collection sculpts have up to forty pieces). Liquid clay called'slip' is poured into the molds and partially air dried into'greenware' pieces, which are then re-assembled using more slip. The greenware is sprayed with a translucent glaze and fired in a brick kiln, creating a glazed whiteware. Disney artists hand paint the whiteware using the original colors from the film.

The paints are applied to the ceramic sculptures in several steps with a trip to the kiln after every step. Each brushstroke breathes more life into the character and brings the sculpt back to its film origin. Because different ceramic colors react differently to heat, artists must research painting and firing formulas for each sculpt to control all the variables, so that the color is perfectly replicated. Finally, many painted sculptures are touched with a unique step, called'plussing. Precious metals, crystal or blown glass are added to the sculpt, following special plussing instructions laid out well in advance.

Plussing enhances the story and character inspiration that have been the signature of the entire process. Each sculpture bears a backstamp with Walt Disney's signature and an incised or decal production-year mark that symbolizes a milestone in Disney history. Sculptures may carry different production marks if series production continues over several years. Sculptures are released as a Limited Edition or an Open Edition. A Limited Edition can be either a Time Limited (released for a specific time period/year) and/or Numbered.

These retired sculptures can never be reproduced as the plaster molds are destroyed on the day of retirement. Once retired, these figurines can only be found on the Secondary Market.

This item is in the category "Collectibles\Disneyana\Contemporary (1968-Now)\Figurines\WDCC". The seller is "vjm1174" and is located in this country: US. This item can be shipped to United States.