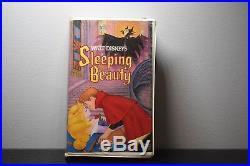 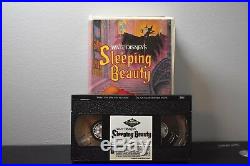 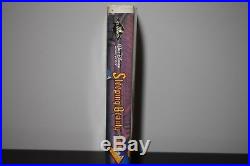 This Sleeping Beauty VHS Movie is not only part of the "Black Diamond" Disney Classics Collection but it also has one of the rarest, Disney songs that was cut from Sleeping Beauty editions after 1990. The song, Once Upon a Dream is sung between Aurora and Prince Philip in a deleted scene towards the middle of the movie. The song, recorded in 1959, was recorded by Buena Vista Studios and was sung by both Mary Costa and Bill Shirley. The tune is taken from The Sleeping Beauty ballet by Pyotr Ilyich Tchaikovsky, specifically a piece from Act 1, The Garland Waltz, or as it has become known in popular culture, Sleeping Beauty's Waltz. The song was later added in DVD reprints.

The item "EXTREMELY RARE 1986 DISNEY CLASSICS BLACK DIAMOND SLEEPING BEAUTY" is in sale since Tuesday, February 13, 2018. This item is in the category "Collectibles\Disneyana\Contemporary (1968-Now)\Records, Tapes & CDs". The seller is "renlo-ca-okavlla6j" and is located in Southington, Connecticut. This item can be shipped to United States.