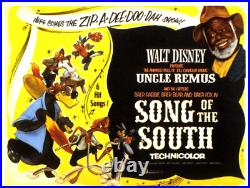 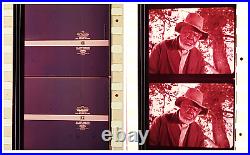 After the Civil War, down in the Deep South state of Georgia, a little boy named Johnny (Bobby Driscoll) is excited about a trip to visit his grandmother living on a rural cotton/tobacco/rice/pecan plantation. Determined to run away, he starts off for Atlanta with all his possessions in a bag. As he starts leaving the plantation, he hears former slave-turned-sharecropper Uncle Remus (James Baskett) telling a group of people stories about Brer Rabbit. He stops to listen, and people start looking for him. Uncle Remus reassures them he knows where the boy is. Then he befriends Johnny and thru his Brer Rabbit stories convinces him to stay at home. Johnny befriends a little girl named Ginny.

She gives him a puppy, and her older brothers want to drown it. Uncle Remus once again saves the day with his stories. Johnny's mother gets angry because Uncle Remus kept the dog, so she demands he not tell any more stories. Uncle Remus, unhappy about the way he's being treated, leaves for Atlanta.

Johnny chases him and is injured by a bull. Although he almost dies, one of Uncle Remus' stories pulls him through. + condition with just a couple of splices per reel. The item "35mm Feature Film SONG OF THE SOUTH (1946) Banned Walt Disney Classic" is in sale since Sunday, June 20, 2021.

This item is in the category "Movies & TV\Film Stock". The seller is "zontar2000" and is located in Olmsted Falls, Ohio. This item can be shipped worldwide.